Whilst we are still very much in the dark about the upcoming Lord Of The Rings (LOTR) televised series, the official Twitter account has begun to drip-feed us some clues.

Back in 2017 when Amazon announced the hugely expensive yet undisclosed deal, speculation was at a high as to what the series revolve around. The world of Tolkien is as intricate as our own. There are back stories amongst back stories. Villages, Towns, Cities all have their own individual and detailed histories. There are so many plausible options as to what would make great television and the internet continues to debate it daily. 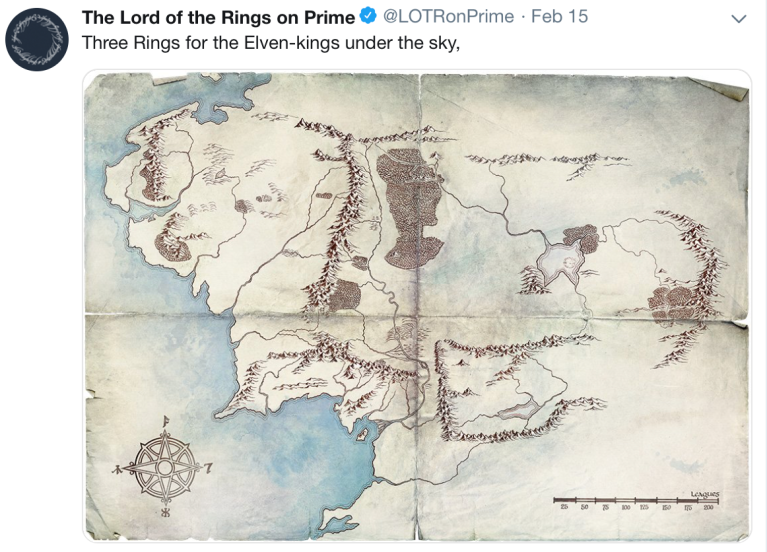 Last week the twitter page posted a picture of a map of Middle Earth with the famed caption ‘Three Rings For The Elven Kings Under The Sky’ This threw the internet into debate. Does this mean an Elven plot? Does this mean third age setting? The map seemed to dwell on a large area to the East.  The most *likely* plot is to be Young Aragorn and even this one has several possibilities (which I will explore in a separate blog!) Aragorn did spend a lot of time in the East as detailed in Appendix A:

‘he rode in the host of the Rohirrim, and fought for the Lord of Gondor by land and by sea; and then in the hour of victory he passed out of the knowledge of Men of the West, and went alone  far into the East and deep into the South, exploring the hearts of Men, both evil and good, and uncovering the plots and devices of the servants of Sauron.’

The difficulty with an Aragorn backstory is that a lot of the material comes from The Lord Of The Rings Appendices and The Silmarillion also written by Tolkein. Amazon have not disclosed whether they bought the rights to these two publications also and if they did – they are keeping quiet about it. This would totally expand the universe and context that they were able to put out and produce. The rights to release are held by Christopher Tolkein the son or JRR Tolkein and whilst he did step down as director of the estate, as the original publisher of The Silmarillion he would need to authorize it as the copyright holder. The very complex legalities behind the material doesn’t stop me from thinking that an Aragon back story would be the best choice for a TV producer. Taking the familiar character as the opening for the new season is a stepping stone into the bigger world that the average LOTR viewer have only seen an inch of. It will ease their transition from the films into a different setting. It poses the question of how far would the producer be willing to take the story beyond the familiar narrative of the original trilogy given how much they have invested. 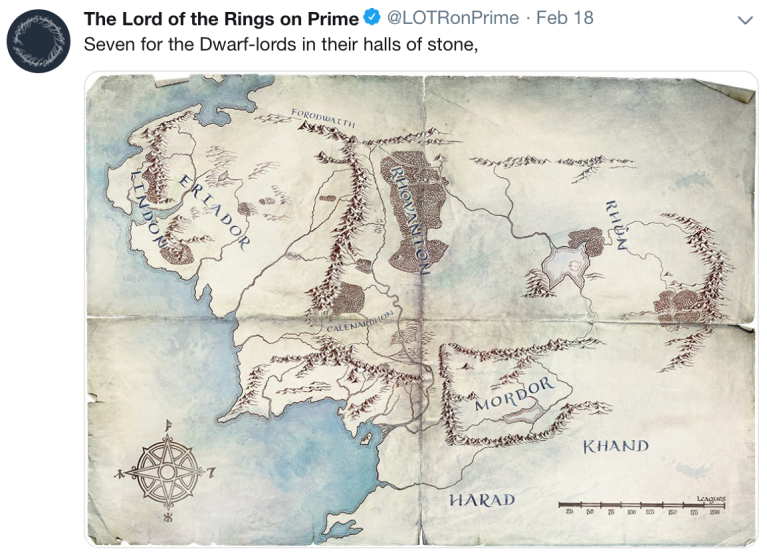 On Monday, fuel was added to the wildfire as another line from the One Ring poem was tweeted off the official account.

‘Seven For The Dwarf-lords in their halls of stone,’

The difference this time was in the map. Where the city of Rohan is – the map uses the name Calenardhon. This implies a few things and complicates theories even FURTHER. Rohan was called Calenardhon before it became Rohan. This was around 400 years before Aragorns birth meaning the most popular theory as above may have been debunked! Until we have seen more of the map I don’t think we need dismiss a young Aragorn storyline. We don’t know if the maps proceed eachother in time, and we haven’t seen a full circle picture.

I’ll be discussing some other potential stories in the next few weeks so make sure to check back! Let me know what you want to see from the series below in the comments!