Well what a bloody week HBO have had. Suffering their second episode leak of the season (and 7th in Game Of Thrones history) fans were left morally split. Deciding whether to watch the fateful episode 6 on a dodgy stream, in 1080hp or wait for a HD version, albeit 5 days later.

This 70 minute episode was arguably in the top four episodes that Game Of Thrones have aired. Yes we’ve had some spectacular put together ‘episode nines’ in the past (Hardhome, Battle Of The Bastards, The Red Wedding) and even though this wasn’t technically episode nine, the poignant penultimate plot kept within tradition with being the most explosive episode of the season. Mostly due to the epic landscape shots that are more than worthy as being comparable to many academy award winning feature films. Also due to the tense drama that built slowly but ever so surely, peppered with Winterfell scenes to elongate the torturous wait of what we all knew was going to happen. Ice and Fire. After 6 long seasons, we watched ice and fire become one big slushy mess.

To open the episode, we watch the magnificent seven trudging through a picturesque yet deathly cold wasteland. Tormund takes MVP in the opening scene by A) coming onto Gendry B) Confirming that he wants Brienne babies and C) learning the word ‘dick.’ Honestly, the more Tormund screentime the better. We must protect him at all cost. Cover him in plot armour wrap him tightly and cocoon him until these big beautiful babies are born. I will have PTSD forever more after hearing him screaming ‘help me.’ Not an enjoyable moment at all. I’m not impressed HBO don’t play a girl like that.

Still growing accustomed to this random collection of characters, we are treated to conversations that I didn’t think would ever take place – especially at this point in the series. Jon talking to Jorah about Ex Lord Commander Mormont, The Hound talking to Gendry, Gendry refaced with Beric. It really does show how soon we are to the day that the doors of Game Of Thrones close forever (and by soon I mean probably years but yano…) All these small interactions were soon interrupted by two blue eyed beasts. White Walker polar bears? I’ll take it! Thank goodness we had a few poor extra wildlings to take the hit, purely inserted as collateral damage.

Now, scenes from Winterfell didn’t really do anything for me. I honestly thought that Aryas new found psycho (even for her) was a bit of a stretch. I’m not buying that her new persona is genuine in the slightest and heres why: Other from the letter she found, she doesn’t really have any logical motive to be threatening Sansa with death. If she truly did think Sansa was plotting to steal the Northern Lords loyalty from Jon, killing Sansa wouldn’t be a logical move for Arya or for anyone at this point – and she damn well knows that. It became obvious that Arya was playing ‘The Game Of Faces’ as soon as she encountered Sansa in her room. It clicked instantly as she said she had dreamed of wearing pretty dresses. Arya never dreamed that. She dreamed of carrying a sword from the moment she stepped foot onto our screens/pages. Equally, it doesn’t really make sense that Sansa is totally succumbing to Littlefingers plan to break the sisters apart. To think that this is something Arya would do cheapens the value of Sansas character, especially when considering the amount of years she has spent around the villainous residents of Kings Landing and Winterfell. After all this hardship and all of Littlefinger’s ‘lessons’. I find it hard to believe that Littlefingers previous deception would not cross her mind when thinking about how this scroll miraculously found its way into the younger Stark sisters hands. Littlefinger suggested to Sansa to use Brienne as a way to stop Arya from plotting against her. What does Sansa do? Send Brienne away. All this leads me to believe that the Stark Sisters feud is a decoy. Still, I wasn’t the biggest fan of these scenes being place tortuously in the middle of the Beyond The Wall drama. Compared to how well the rest of the episode went both directorial and performance wise, the Sarya scenes definitely dipped the quality of the episode as a whole.

It’s not long before the gang stumble upon a group of Wights *cue always sunny soundtrack*…It is in this scene it becomes apparent that to kill the army of the dead, one must kill the White Walker that turned them in the first place. This is pretty vital to the plot because it insinuates that if The Night King – who we can assume turned the majority of the army – is dead, they have a good chance of wiping every wight out completely (furthermore assuming that The Night King created the other White Walkers.) It’s a bit confusing to get your head around but it all comes down to killing the Night King which everyone easily guessed anyway. WHO The Night King is is a whole other story and I’ll be discussing all things Night King in my next youtube video.

Anyyyyyyway before I digress further, let’s talk The Hound. The big dumb cunt. (before you angry text me dad I’m clearly quoting) Another really difficult concept to try and understand is how AWARE wights are. They were obviously conscious enough to realise that a rock hitting the frozen ice meant they could walk on it, but not conscious enough to themselves check to see if it had yet frozen over.Theres a lot of plot holes surrounding this but we can hope in the coming years (lol) we will get some answers to how exactly the wights work.

I had actually thought we’d deal with a number of deaths from this small group opposed to just Thoros. As soon as Tormund took Gendrys warhammer I thought ‘oh fuck’ for the 67th time in the episode. Thoros’ death was an easy choice as he’s known enough to incite a small reaction amongst the audience but he’s no way near The Hound, Tormund, or Jorahs level of popularity. Soon after came the mass chaos. The storming of the wights, with only Daenerys able to save the day. Much like BOTB, Jon was fighting a lost cause. There was no plausible way out for them and well I never have been so happy to see a dragon swooping down to save my multiple baes. Jon however, come on son?? Why you no get on dragon straight away! I honestly was expecting Rick Grimes to appear with his axe hacking away at every zombie in sight for absolutely no reason whatsoever other than mad rage. Jon’s rage at seeing how The Nights King took down Viserion was evident in the way he continued to slash through the wights. That dragon dying affected me way more than I thought it would do (being a direwolf gal myself) The bloody gushing out of his belly as he crashed through the air was quite honestly horrific. This also made way for some of Daenerys best facial acting thus far. The sickened heartache she felt could be seen all over her face as she watched one of her children die at the hands of gold medallist Javelin olympian The Nights King. All this high emotion as well as cutting to Jon being swamped by wights under the freezing waters was all too much. It was a pause and get your breath back every 45 seconds kinda viewing. If any of the dragons were to die first it was always going to be Viserion. This leads the way for Drogon to come and take it down in DRAGONBOWL just as Khal Drogo took down Viserys. Thedragons will surely take the same paths as their human namesakes.

One final appearance from Benjen Stark rounded up the drama up north as he sacrificed himself in order to save his nephew. Those taunting the internet with ‘There was room for both on that horse’ need to understand that Benjen is actually unable to pass through the wall due to it’s magical protections. Benjen’s arc has been rounded off nicely. How did he find out Jon was in need you may ask? When Benjen helped Bran out of trouble in his prior appearance he had said that the three eyed raven sent him. One can only assume Bran communicated with Benjen in some way to send him in the right direction. On a Benjen note – loved seeing the mirroring of Benjen’s Benjen-less horse arriving back at the wall gates, just as it did in Season 1. RIP Benjen Stark – you did us well.

The scene between Daenerys and Jon at the end was the stuff dreams were made of. This was one hundred percent Emilia Clarkes greatest work on the show. For the first time we got to see her explore her characters depth as she deals with the conflicting feelings when it comes to mixing business with pleasure. It’s very obvious that she feels something for Jon, unbeknown to her who he truly is. What I love about their scene is that they don’t actually have to say anything to eachother for the audience to get what they feel. For example, when she sees the scars on his torso from the Nights Watch mutiny it’s clear that she now knows how theres more to than what meets the eye with Jon. That there is more that needs to be explored there and I certainly look forward to when the truth behind his resurrection comes out in its entirety. Secondly, the gentleness that Jon touched her hand with. OohhhHhhHHh MY goodness me. Praise be the old Gods and the new. I think actual tears subliminally left my eyes when he said Dany. Like WHUT. It’s these kind of scenes that provide so much more emotion than a conventional sex scene, that so many shows depend on to portray a developing relationship. It was also the first time we see Dany humbled, opposed to her usual self-assured self. Even though Jon has took so much from Dany, she has also learned a lot from him about being a leader. I cannot wait to see these two have beautiful Targaryan babies. There was so much play on ‘Jon passing down his sword to his children’ and ‘Daenerys not being able to have children’ that it’s basically confirmed that they’re going to have babies 100%.

Let me know what you thought of the episode and what you think is to come!

Pray that we get both Cleganebowl and Dragonbowl next week to make for a spectacular finale! 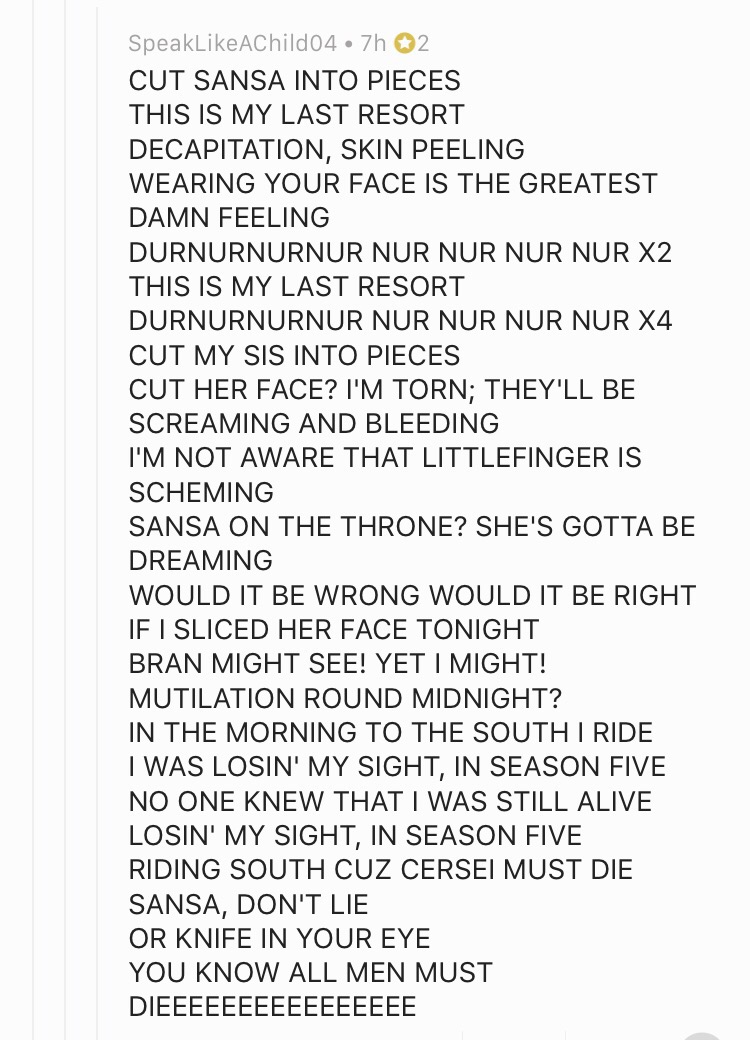