Well what better way to sail (eh Gendry) into episode 5 of the penultimate season than a brilliant depiction of friends reunited. I hadn’t really realised just HOW MUCH shit went down during this episode until I came to write about it! Where action lacked, plot developed ten folds. Probably the most it ever has done since season 1. It’s these kinds of episodes that incite excitement and anticipation into what is to come.

The episode began right where we left off, albeit slightly further down stream. Jaime and Bronn oh so miraculously emerged from the swampy waters that subdued them to protect them from Drogons firery roar. Didn’t you know that being called Jaime Lannister is the greatest plot armour of all? This made way for a dominating scene delivered to us wonderfully by Daenerys and The Tarly Men. I thought that Emilia Clarkes performance in this episode was one of her strongest yet, and it really showed in this opening scene.

Jaime, back in Kings Landing tells Cersei of the truth behind Joffreys murder. Cersei scenes get darker each week. They used to be full of colour and passion, no matter who she was acting alongside. Now her presence is as hardened as the high neck scaled leather war gown she adorned this episode. Can we just all appreciate how incredible her outfits have been this season? Compare them to her looks in earlier seasons and you can truly see how big of a transformation she has had. She is a character that can easily be brushed off as ‘always been evil’ however upon reflection, you can really see what her grief and madness has done to her in these later seasons.

The first wonderful reunion we get this episode is Ser Jorah King Of The Friendzone Mormont, with his queen and unrequited love, Daenerys. I actually didn’t expect to see him this soon after leaving the Citadel, but I forgot we are now working in super-speed.  What I thought was especially interesting into his reintroduction into Danys world was the three-way tension between Jon, Daenerys and Jorah. Obviously nothing has happened with either man, yet Jorah seemed very aware of Jon and Dany, and Jon definitely seemed aware of Dany and Jorah. It was so subtle but thanks to the excellent acting and direction, this vibe was put across very nicely. If you watch back the scene in which they are deciding who goes North Of The Wall three times, each time focus on someone else. You can really see the high emotions that cannot be spoken.

Another great reintroduction was Drogon and Jon. Firstly I thought the dragon looked SO BLOODY GOOD. That post-production editing was #FLAWLESS. Each week we are treated to more #JONISATARG hints and I’m living for every single one. I don’t know why I felt so many hashtags are necessary for this point but yano, #WHATISHYPEMAYNEVERDIE #RL+JTATTOOEDONMYHEART

Speaking of  R+L=J, HELLO SAM I know that Gilly is one of the most annoying humans in Westeros but if you CHILL for a second you may have heard her begin to reveal the deepest darkest secret on that entire planet! Ohhhh wow how frustrating was that part? Gilly was literally about to read about how Rheagar annulled his wedding to Elia Martell and instead married Lyanna! Do you know what this means? That Jons claim to the iron throne is 100% legitimised! He’s not even a bastard! I was far too amused by this to even comprehend that Sam decided to pack up and leave. Also can we just quickly discuss how RUDE the majority of the archmaesters are? I honestly felt like I was watching an Oscars panel. Or any corporate board meeting in that matter. It’s no surprsing that Sam has chosen to leave. Where do you think he will head now? Back to the wall? To winterfell? If ONLY he had left with Jorah we could have had another dragonstone reunion. I was kinda bummed that Jorah didn’t mention how he was healed because he owes Sam his life. Imagine the conversation playing out.

Jorah – I am healed

Jorah – A man called Samwell Tarly. I owe him my life. We must do all we can to protect his precious soul

Tyrion and Jorah was another reunion I did not expect to see! Honestly it feels so long ago since they were together I had almost forgotten all about it! It’s so touching to see all of these people come together but it also makes me very sad because it means it’s all coming to an end!

Anyway enough about the surprise reunions (for now) and onto the important stuff. Jon and Daenerys hatch out a plan to capture a wight and take it to Cersei to let her see how real the threat is. The council all agree that this is the next natural progression in the fight against the dead. Tyrion thinks he may be able to swindle Jaime into hearing them out so off Tyrion and Davos go to Kings Landing. I really loved both parts to this part of the episode. Ser Davos in Kings Landing, and Tyrion in Kings Landing. So first and foremost. HELLO GENDRY and THANKYOU Ser Davos for providing us with the greatest nod to the audience of all time.

I really didn’t know how Gendrys return would pan out and whether or not Joe Dempsie would still be up for the job, but as the saying goes, he’s back and he’s better. Everything about his return was glorious. His enthusiasm, his get up and go, THAT WARHAMMER! Whilst Davos was busy delivering us the line of the season, Jaime was underground with Tyrion. This scene was short but powerful. Both actors amazed me, just by the use of their eyes and strained voices you could gather the high emotion levels. It was really quite sad when Tyrion delved into ‘Do you think I wanted to be born this way’ as a grasp to reach out to Jaime. The brotherly bubble was soon burst as Cersei menacingly lets Jaime know she knew exactly what was happening. She also lets him know she is PREGNANT!!!! with!! his!!!!!!! child! Personally, I strongly believe we will not see this baby. I am a strong believer of Maggie the Witch through and through, therefore I know that Cersei is only supposed to have three children in her lifetime. I’d be unsurprised if she was actually lying about the whole thing as a way to reel Jaime back in.

Back on Dragonstone once more (I honestly have jetlag just WRITING about all these location jumps) and Gendry is introduced to Jon. Their meeting was so bloody brilliant. I know that Davos is literally season 7 MVP and nobody should defy him and his fabulous lines, but I really liked how Gendry defied him and told Jon who he was, flaws and all. I think Jon and Gendry are my new favourite bromance and I wasn’t even ready for it.

Back up North things are getting bitter once more. Bran is quite obviously seen by The Nights King as he delves into the body of a raven to check up on the progression of the army of the dead. Maybe he should just STOP doing this, not that it matters considering they are already going to bring down the wall thanks to Bran being touched by The Nights King. Ffs teenage boys honestly man.

Cracks are beginning to show between Sansa and Arya. I’m still 100%  confused on what to believe with Sansa. What she says and what her face says read completely different things, yet the writers haven’t actually given us anything to actually make a decision on her loyalty stance. The only thing worse in Winterfell right now than Sansas resting bitch face is Littlefinger playing Arya. How dare you. HOW DARE YOU? Honestly I will not sleep easy until Arya kills him, peels off his face and uses it to get herself into Kings Landing. There are different theories about what the true note said.

Anyway what this entire post has been building up to is the excitement – in fact it’s more than excitement – it’s probably levelled with the same emotion I believe I will feel upon the birth of my first born child. The squaddest squad goals of all time. The most brilliant of suicide squads. The avenginist avengers. JON. TORMUND. THE HOUND. THOROS. JORAH. GENDRY. BERIC. The blessed seven. The big question now is who will make it back alive? Will one of them become the undead that they are to take to Cersei? I just would like to say this now. If Tormund does not return, I swear to the old Gods and the new D&D, I will look for you, I will find you, and I will scream cry and play you gifs of Tormund raising his eyebrow at Brienne listing reasons why she deserves a man like him until the day that I die. 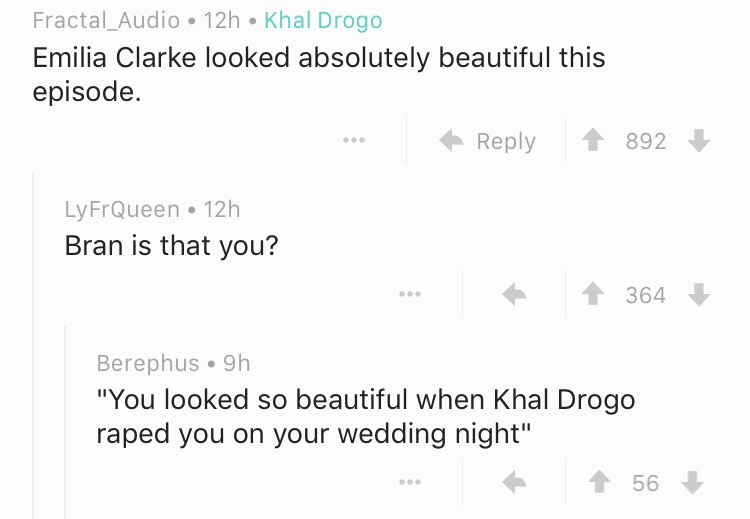 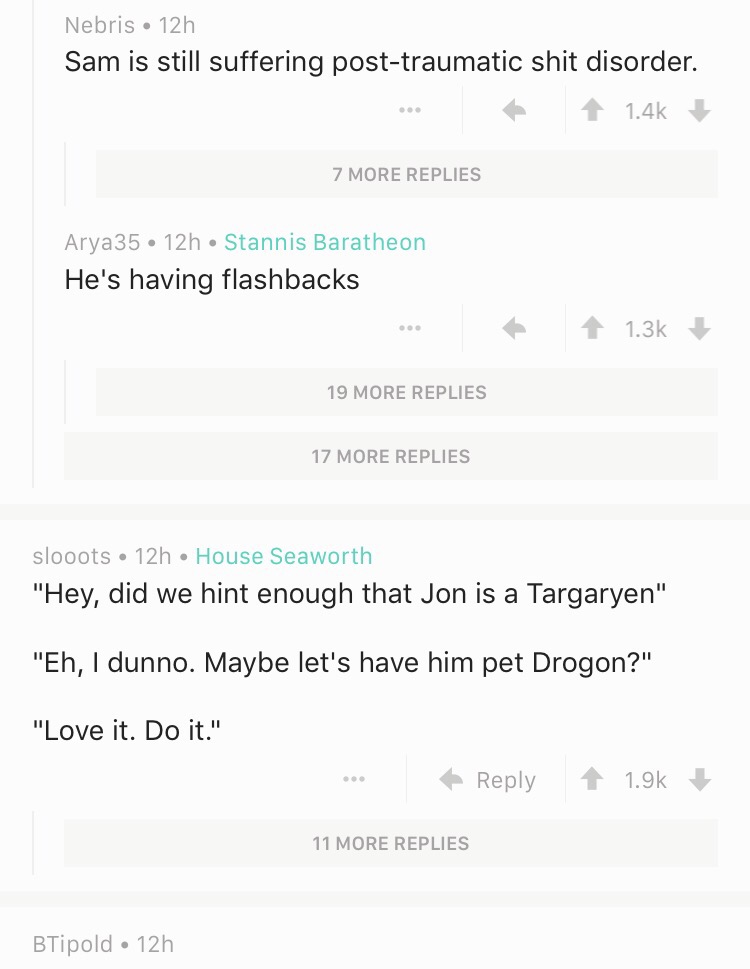