This episode of Game Of Thrones delivered to us everything that we love in a Game Of Thrones episode. Blood, sex, gore, and hints at a Stark reunion. I’m seriously loving the pace of this season. I know there’s only been two episodes, but each have moved swiftly along focusing on the key points to the plot. The showrunners have took on board the somewhat negative feedback from last seasons slower development and have certainly turned things around .

The opening scene really reminded me of those earlier seasons. When council rooms would be full of people, and of ideas. Daenerys is surrounded by some hella powerful women (or so we think.) Ellaria Sand, Olenna Tyrell and Yara Greyjoy all agree to help Daenerys take the seven kingdoms. Whilst I particularly enjoyed the exchange between Dany and Olenna, it does worry me that she’s basically edging Dany towards ignoring Tyrions advice and hello Tyrion is the MVP. It was somewhat surreal hearing Dany speak Jon’s name and vice versa. These two very separate worlds are about to unite and I couldn’t be more excited! Even hearing Tyrion and Jon talk about each other made me want to cry! Bring on this big ole wonderful meeting.

Arya, Arya, Arya. How she has grown. Both Maisie Williams and the character that she plays have both really come into their own. Maisie has pulled all the stops out with her acting these past few seasons and it makes for excellent viewing. She holds the screen in a way that really enchants you into rooting for her despite her underlying hound like dark charisma. Even the way she used the bread and ale as props was brilliant and made her character a lot more three dimensional in the eyes of the viewer. The scene with Hotpie wasn’t the reunion I was expecting to see this episode (Gendry where u @ pal) but it was certainly a pleasant surprise. Seeing Aryas face go from her usually hard exterior to the look of complete overwhelming love upon finding out the Bolton’s are no more was EVERYTHING that I’ve been waiting for. I also loved the way that Hotpie spoke about Jon. It goes to show how much of a myth and a legend Ned Starks bastard is amongst the northmen. The excitement in his voice and eyes when discussing the Battle Of The Bastards shows how much these northmen have put all their faith into this elusive bastard slash ex lord commander slash secret Targaryan slash wilding lover. A very excitingly uncertain time for the commoners of the North.

Later on, in the scene with Nymeria (by the way HI Nymeria hun I’ve been expecting you) the real sadness prevails as we are surrounded with metaphors just as Arya is surrounded by the wolves. Writers D&D confirmed after the show that her line ‘That’s not you’ was a direct reference to the line Arya said to Ned in S1 when he tried to tell her how she would become a fancy lady and marry a lord. ‘That’s not me.’ she responded to him. As she did then, she understood that Nymeria wasn’t going to leave her pack for Arya in that moment. She can’t be domesticated just as Arya couldn’t be. I feel that Arya knows that she will still protect her if and when she comes to harm which makes Nymerias departure a little more painless. Now, I think this said departure could mean one of two things. It either means that as Nymeria did, Arya will return to her pack up North (Jon & Sansa) as she knows that it is better to be surrounded by your own kind, rather than to be alone. OR it could go the complete opposite way and mean that just as ‘that’s not Nymeria,’ it would not be ‘Arya of her’ to go up North instead of carrying out her plot to kill Cersei. If I HAD to choose what she will do, I would say that she will carry on going North. Will she bump into Jon on the way? It’s a possibility due to it looking like Arya was on the Kingsroad to Winterfell. Equally, Jon would have to travel slightly south before reaching the bay which leaves to Dragonstone. There’s a slight chance that they could bump into eachother but come on, this is Game Of Thrones were talking about. Of course they will miss eachother. I do think there is a mighty strong chance that Arya will bump into The Hound however on that very same road and that is a reunion that I am very much here for!

Missandei & Greyworm is a subplot that I have a lot of time for. Their romance is so sweet and innocent and a perfect balance in the Westeros world of narcissistic treachery. Whilst I don’t think it did anything to the plot besides confirm that one of them (and probably Missandei) will die this season, I’m still glad that the scene took place.

Another week, another classic Sam FML moment. He is well and truly bringing the sass this season. Seeing him learn the Maesters ways in Old Town is better than I could have ever imagined. I’ve seen a lot of shit that’s been hard to view in Game Of Thrones yet nothing has made me feel as ILL as watching Sam scrape those scales off Jorah. I mean for the sake of all that is holy did we really need to see in such high def detail. Whilst I absolutely applaud the editing decision to cut from the pus oozing scale to the cheese pie I can honestly say I will be off Camembert for a LONG time. I’m dry retching even thinking about it now. These Old Town scene transitions just keep getting better and better. I also loved the similar style transition which finished Missendei and Greyworms sex scene. As she reached for the bed post the shot swiftly changed to a Maester reaching for a book. These are the small details that I live for in this show, I swear. Yano that and 0.5 second exchanges between Brienne and Tormund…

I love how conveniently Sams raven gave Jon a chance to kill two birds with one stone. He now has the vital information that there’s a shit load of dragonglass waiting for him where coincidently, Daenerys is also waiting for him. The highlight of the Winterfell scenes was obviously Jon choking Littlefinger against the wall the very same way Ned did in the first season. It makes me quite scared about what Littlefinger will plot against Jon, but all the same it made for instant gratification of Littlefingers disgusting creepy self getting notched down a peg. For now. Another major convenience for Jon was that Tyrion left out of HIS raven that should he arrive in Dragonstone, he should prepare to bend the knee to Daenerys. Do you think Jon will be happy enough to bend the knee if it means access to the dragonglass? Will Jon inform everyone what Melisandre did to be exiled? Personally, I think he will, and he will.

So let’s talk about that finale shall we? What a wonderful, firey, gloomy, bloody, boat battle it was. Firstly, absolutely wounded that the Yara and Ellaria ship never got to play out because yano they’re both fierce AF. Secondly, even though the Sandsnakes are mad annoying, I was both saddened and shocked to see 2/3 succumb to Eurons power. Euron is an absolute maniac but up to now I still love his character. I mean that entrance?! Seeing Theon revert back into Reek in a matter of seconds was absolutely incredible thanks to Alfie Allens amazing acting in this scene. He really doesn’t receive enough credit for the flitting between the two sides of his character. I think he actually made the wise choice to flee the scene because it would surely have only ended with both Greyjoy siblings dead. Yes people – Yara isn’t dead! In an extremely confusing final shot it does appear that Yara was hanging from the boat alongside another female but alas, that was the two Sandsnakes. I don’t think Yara is going to have a very nice time in Kings Landing either – if she makes it that far! Now wheres Gendry with his rowing boat to save Theon?It’s going to be interesting what Cersei will do when Euron delivers Ellaria and the remaining Sandsnake to her as her gift. I’m guessing that as The Mountain once raped Oberyns sister, killed her children, and then ‘dashed her head against a wall.’  The same – or a variation of the three – will happen again. Especially with Cersei fuelled with the anger/anguish of losing her only daughter (innocent as she was) to the hands of Ellaria. The next episode title is The Queens Justice and it’s not going to be a pleasant episode that’s for sure. There are currently three queens in place – Daenerys, Cersei and Sansa. To whom will justice fall upon? 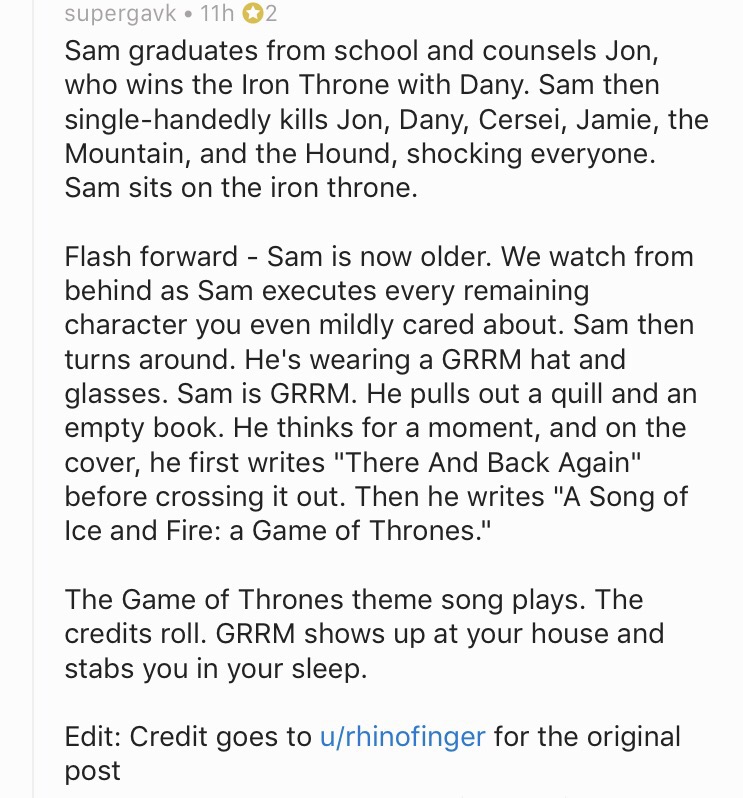