Good Evening one and all, welcome back to my weekly Game Of Thrones catch up. Tonights premiere was a satisfying all rounder episode which set up the season very nicely. Whilst there was no – so to say – explosive moments, the subtle power shifts were enough to provide us with a great and sensible start to the season. Not many stones were left unturned as we visited various locations including The Wall, Winterfell, Kings Landing, The Riverlands, Oldtown, Dragonstone and interestingly The Hound alongside Beric Dondarrion.

The episode began in the Freys company. We see Arya once again putting her new found Bravosi skill to good use as she finishes off the rest of the Frey family who were responsible for The Red Wedding. I really enjoyed this being the episodes beginning as it rounds off last seasons Arya drama nicely as well as providing a nice bloody beginning. Just the way us Game Of Thrones fans like it eh. Later on, we see Arya stumble across several Lannister soldiers who share meat and wine with her. Of course this is where we find Ed Sheerans long awaited cameo. I didn’t really expect him to have that much of a generous portion of screen time so It was surprising to see the awkward and rudely overt close up shots. They seemed ever so slightly ridiculous alongside This Is England star Thomas Turgoose’ over prepared dialogue delivery. All that was missing from the scene was a coca-cola truck passing by. Asides from Ed Sheeran debuting new songs all over Westeros, it was a nice interaction in terms of Arya breaking bread with Lannister soldiers. Whilst in one way I was half expecting her to kill them, it really helped to humanise the Lannister army. A lot of them are just young boys dreaming of home. This could be important when it comes to armies choosing loyalties when Daenerys comes into play. It’s worth noting that I couldn’t help but feeling sad that Arya isn’t planning a trip up north, however I do look forward to more of her journey and crossing those names off her list. As a reminder, this is who is left on her list: Cersei, The Mountain, Melisandre, Beric Dondarrion, Thoros Myr, Ilyn Payne.

Back in Winterfell we see Sansa trying to change Jons plans in regards to allowing the Karstark and Umber families to stay in their castles. Sansa wants them stripped of their their rights after seeing the men of the family join the Bolton army last season. Jon’s kind but firm nature isn’t swayed from Sansas more reckless thoughts yet the two argue it out like any siblings would. Jon is pretty adamant on wiping the slate clean which I think is due to his own background as a bastard in the Stark family. Perhaps it resonates with him in ways similar to how Catelyn punished him by showing him no love or kindness for the supposed sin his father committed. This also allows Jon to eventually approach Daenerys without the hostility other houses are sure to feel about her. He won’t see her as simply ‘The Mad Kings daughter’ but as a claimant in her own right.

Lady Lyanna Mormont is back and serving us sassy realness with her instruction to train every girl, boy, man and woman able of fighting. “I’ll not sit knitting by the fire whilst the men protect the North” – SO ahead of her time. Littlefinger is never too far from Sansa as he rather sickly watches her every move, seemingly still set on offering her a hand in marriage. Whilst Sansa is quite obvious with her rejection of his love, or lust, or whatever fucked up mother daughter complex he has going on, I still don’t think she’s one hundred percent loyal to Jon just yet. It’s really difficult to analyse because one minute she’s undermining him in front of a council, and the next she’s speaking a lot softer and telling him he’s a great ruler. She admits that she has learnt a lot from Cersei which really is quite a terrifying statement. Anyway, we all know what the highlight of Winterfell was this episode. OBVIOUSLY Brienne and Tormund having the smallest of moments. YAS! YAS! YAS! YAS! What is hype may never die.

From one Stark to another and we have a short but sweet scene with Bran and Meera requesting entry to Castle Black. Not too far behind them is a horrifying scene. The Nights King with an army of the dead who seem to have acquired even more soldiers including what seemed to be Wun Wun? How his corpse managed to get from Winterfell to Beyond The Wall I do not know but due to the nature of the giant White Walkers injuries it definitely looked to be him.

Bran wasn’t the only person to witness this in his mind as we see The Hound view a similar scene in the flames alongside Thoros of Myr. This for me was the most important sub-plot of the episode. The Hounds character is very straight up, what you see is what you get and that’s the way it has always been. To see him now looking into the fire and submissing himself to The Lord Of The Lights visions is quite a defining moment in his character arc. For someone who can’t even remember a simple prayer when burying the dead, it’s really poigniant that he can actually see into the flames by way giving himself To The Lord Of The Light. Fair enough he is in no way on say Stannis’ level of falling for the faith but this small opening is huge for a character such as The Hound. I found myself thinking that any moment he would surely break his prophesising and call someone a dumb c*nt but Rory McAnn gave an excellent portrayal of a very worried man. The father and daughter he buried draws strong reference to the books and also back to when he and Arya stole silver from the very same family. The Hound seeing a mountain is also a sure sign that #CleganeBowl will be happening in the foreseeable future.  I think this new found Sandor will make for an incredibly interesting story and I hope that the brotherhood without banners head North to meet with Jon. With Melisandre out in the wilderness somewhere, I wouldn’t be surprised if she soon meets up with the brotherhood also. Cersei and Jaime exchanged no pleasantries in The Red Keep as Cersei mulls over her enemies. We see a shift in Cerseis character as she goes from the grief we have seen her hold with her first two childrens death, to cold callus in response to Tommens in which she deems ‘an act of betrayal.‘ Hints of madness certainly shine through as she declares herself Queen of 7 Kingdoms to which Jaime shuts down to ‘3 at best.’ It’s quite clear how different Jaime and Cersei have become since their beginning. Cersei is only concerned about her own legacy and is driven at the thought of destroying all that opposes her. As Jaime reminds her, there is no point in creating a dynasty as they no longer have one without their children. She claims she wants one for the two of them but it’s apparent through her emotionless expression that there is only one person she is thinking of and it’s herself. To be fair to Cersei, it’s no surprising that this madness is creeping up on her. All three of her children who she absolutely did love have died, and there are still two prophecies lingering in her thoughts. That she will be replaced by a younger and more beautiful queen, and that one of her brothers will kill her.One exceptional piece of foreshadowing took place in this scene and it is excruciatingly subtle, critical and all sorts of brilliant. As the two Lannister’s are walking all over the freshly painted map (so rude.) Jaime ends up standing on the area known as The Fingers, Cersei stands on The Neck. WHAT CAN THIS MEAN YOU MAY ASK. Well my friend, think yourself back to that very same prophecy in which the witch said those very perilous words to Cersei “…and when your tears have drowned you, the valonqar shall wrap his hands about your pale throat and choke the life from you.” WELL played whoever called this direction, well played.

So let’s talk Euron Greyjoy shall we. What is his gift? Is he ever backing down on his proposal to Cersei? Is he headlining the Other stage at Glastonbury in those leathers? Who the hell knows but i’m here for it! I like that his introduction in this episode was a lot more subtle than his last, and that his charm is evident in his ability to mock Jaime without consequence. He is playing a long game and I look forward to pondering over which head he will choose to bring Cersei as a gift.

Sam provided some comic relief amidst the harsh dark tones of the rest of the episode. His shitty montage made for hard to view television as we watched him take on the reality of becoming a maester. Queue an incredible appearance from Jim Broadbent restricting Sam from the forbidden section of the library. He has certainly learnt from his mistakes considering the last time he let a novice enter the restricted section they split their soul into 7 and terrorised an entire world for a quarter of a century. 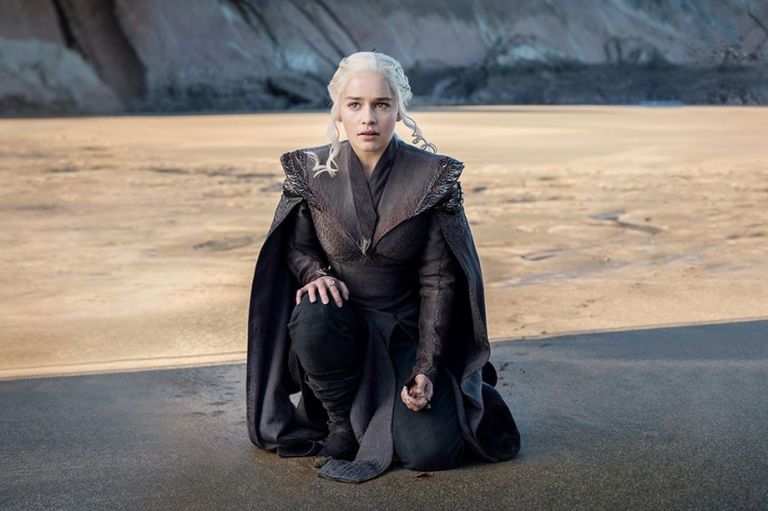 The episode draws to a close with an emotional reunion between Daenerys and her homeland. She walks past the throne room and straight into ops which indicates we may see a slight change in her this season in terms of her planning and execution. With Tyrion by her side, I’m certain that she can be successful as he helps to rationalise her decisions.