[all images belong to AMC]

Well well well. There we have our first episode of 7B, and boy did a lot happen. The main problem with 7A was slow plot development and drawn out episodes. Tonight we saw a number of big developments happen in one episode which is a MASSIVE improvement already.

The show began with an elusive and dark pre-credits scene where we witness Papa G being very very shady. We see him ransack the pantry and make his great escape, none the wiser to what on earth he is actually doing. In a blink and you’ll miss it moment you can actually see another figure in the car with him. Who is the mysterious character you may ask?! Well, I’m making the guess that it’s the booted fellow that was stalking Rick and Aaron in the prior episode. Whoever it is, seemed to make Father Gabriel pretty anxious. It’s plausible that he was tracked down when he was on watch (in a post end credits shot last episode we saw someone watching him from the trees) He then could have been told to ransack the pantry for the food that was took from the boat supplies, and then knowing Rick & co would follow the clue, he led them straight to where this other community wanted them to end up. Surrounded by guns. More on that later.

For the first group scene I admittedly found the general tone to be a bit on the cringey side. So much so that I was actually glad when Gregory shut down Tara when she started to pitch in with some inspirational talking. Gregory continues to be a class A dick and is back with the wrongful name calling of Maggie. He is such a wonderful character and Xander Berkeley does such a good job of playing him.

This slightly animated tone continues into the Kingdom, yet it works much better there. I absolutely loved Rick & co’s introduction King Ezekiel. Even more so, Rick & co’s introduction to Jerry (who gets funnier with every appearance – his reaction to Ricks story was priceless.) It was really nice to see a human reaction to Shiva too. It’s nice to be reminded that the likes of Rick & co still have an ounce of surprise left in them. I’m just really thankful for whoever is scripting The Kingdom scenes. The show really needs these quick bursts of humour delivered so skillfully by members of The Kingdom who speak as though they’re at a LARP convention.

The slightly cheerier side to this section of the episode was briefly killed upon mention of Negans victims back at Alexandria. It was genuinely SO SAD to see Morgans reaction which I felt was played brilliantly by Lennie James

Rosita seems to have developed a bit of an attitude issue. You’d have thought that considering she just got Olivia killed and Eugene captured she would be trying to make a bit more of an effort, yet she doesn’t seem to care, and nobody seems to care what she did last episode either. It’s a difficult dynamic between her and Sasha. It was implied when she gave her ‘the nod’ last episode that things were cool between them, yet this week her dialogue indicates otherwise. I get that she’d still be pissed that Sasha was bedding her ex, but in the circumstances they’re in, i’m sure it wouldn’t be the top of her list of things that annoy her.

Other interesting scenes that took place at The Kingdom were the interactions between Carol and Ben and the one between Ben and Ezekiel. I personally think that Carol will be the key to changing Ezekiel’s mind to join forces with Alexandria & Hilltop. Due to her recent passiveness however, it’s clear that something or someONE is going to have to change her mind before she can change anybody else’s. Ohhh well lets just drop Daryl nicely into The Kingdom to do that job then! Did anybody else scream with delight over the Daryl/Carol implications? He got so damn cute and angsty at Morgans first mention of her. It’s good to see that she’s still keeping on top of her survival skills despite taking a hermit route.

From here, the action heightens as we watch Rick & co leave The Kingdom. Everything sped up as we watch Rosita pull some top notch wiring skills out of her ex military past. The intensity grew by the second as everyone tried to dismantle the explosives. Following from this we got BAD ASS RICHONNE MOMENTS AND IT FELT SO GOOD! The car hot wiring, the drive itself, the side eye, the escape, the words of passion. My Goodness Michonne is everything Rick needs and more. 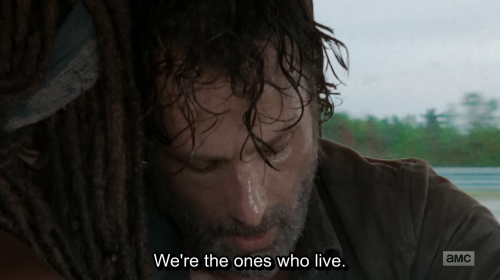 The cinematography in this section of the episode was I N S A N E. The fourth wall breaking, the wideshots, the general idea of it were all so badly needed for viewers. My one criticism would be that it seemed extremely unrealistic that Rick and Michonne would make it to the cars without a single bite or fight. The walkers swarmed Rick yet none seemed to think to bite him? It can be let slip for how awesome the car take out was though.

I’m so glad we got some Simon airtime in this episode. He is another great addition to the supporting cast who brings dastardly humour in his wake. Even though I definitely missed Negan being on screen, it was nice to have Simon fill in some scenes. Negan still managed to make me laugh out loud with his radio speel. His voice and jokes are actually even funnier being broadcast on radio.

‘Without Fat Joey, Skinny Joey is now just Joey, and that is a goddamn tragedy.’

So. Back to Rick & co being surrounded by a new community. There are a couple theories flying around the internet. If you want to read the short list of possibilities then scroll to the bottom of my post! If you’d rather live blissfully unaware of who it may be in a happy little spoiler free life then do not.Whoever it may be, it was sure strange to see Rick smiling almost manically like that. I think he is smiling because he has found a bunch of people who are armed and unafraid. That’s all he wants right now – recruits. He has no qualms that he is actually being threatened, he only sees potential and that is what makes him the best leader in the Zombie Apocalypse in the WORLD! Sidenote: Andrew Lincoln delivered A*** acting once again and I’ll be forever thankful to him for being the perfect Rick Grimes week after week.

WHY IS RICK SMILING?

MORALES
Remember before the OG group left for the CBD in Atlanta? Well there was a nice little Mexican family who was headed by the father Morales. Rick gave them weapons and ammunition before the they decided to head towards Birmingham in search for more of their family. In the comics, Morales comes back into the storyline. Could this be the reason for Ricks smile?

COMPLETELY NEW GROUP
There is always the chance that this group could simply have been created exclusively for the TV show. It certainly wouldn’t be the first time that this has happened and the characters could simply be used to widen the world that Rick knows, and to fill numbers in his army.

One thought on “The Walking Dead S07E09”