First things first, Patrick Warbuton as Lemony Snicket. If you’re an avid reader of my blog you’ll know that I am no fan of the fourth wall being broken. However in this instance, Warbuton is perfectly placed at the forefront of our screens to direct us through the unfortunate story of the Baudelaire children. Warbuton manages to capture the monotonous explanations that Lemony Snicket peppers the books with, with a very interesting pained look for most of the series. The kind of look that appears after years of following the lives of your dead unrequited loves orphaned children. The start of the episode also greets us with one of the best quirks about the books, Snickets love letters to his departed lover. 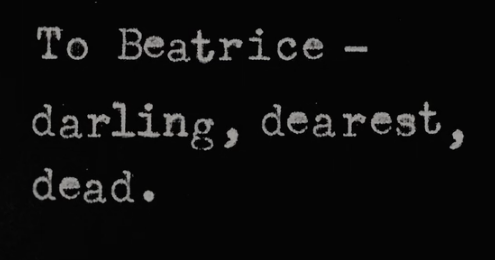 The casting of the Baudelaires is the most perfect thing about the show. Because I am a pinnickity human, I usually hate the casting of anything I love that isn’t me, however Violet (Maline Weissman), Klauss (Louis Hynes) and Sonny (Presley Smith) are all superb. They have a wonderful energy both together and alone. Violet is beautiful, bold and holds herself as the intelligent mechanic she ought to be. She has always been an incredibly positive inspiration for young girls and she’ll be even more prominent now the story is being televised, so to have her cast so perfectly is a real treat. THE WORLD NEEDS MORE FEMALE MECHANICS!  Klauss is the sweetest boy and his love for his sisters is so wonderfully portrayed, as is his ingenious knowledge and expressive emotion. As for Sonny, well she might just be the cutest baby I have ever seen. I was slightly unsure about the post production editing Sonny has gone through but as the season progressed I became more used to it.

Neil Patrick Harris (NPH) is almost unrecognisable as Count Olaf. His first introduction was dark, grey and intense as it contrasted with Justice Strauss colourful pastel overtone. The intensity was quickly popped as he muttered a simple ‘Oh’ as if his stern gaze from the attic room was an accident. This right away threw us into the type of Olaf NPH would deliver. Animatic, witty with intermittent moments of ferociousness. NPH does musical numbers very well, as the 2015 Oscar ceremony proved to us. However, it seems that the theatrical side of Olaf has been played on more so than the villainous and genuinely frightening side of his persona by incorporating the musical  numbers.

The first episode also introduces us to characters Mr Poe, and Justice Strauss. Mr Poe is played very well by K Todd Freeman who characterises Mr Poe especially well with his suspicious cough, and his properly punctuated dialect. Justice Strauss is played by the wonderful Joan Cusack who portrays her characters a lot more ditzy than I remember in the book series. One character that does retain particular interest throughout the series is Jacquelyn, Mr Poes receptionist. She is not a named character in the books, yet is definitely one of the best characters in the Netflix series. She is one of the main holds of mysterious focus and I’ll be interested to see how her character will connect to the plot as a bigger picture.

The cinematography and general art direction is one of the best things about the Netflix series. The gloomy detailed Olaf manor contrasts highly with the brighter side of the street that Justice Strauss resides in. It’s a very real Tim Burton vs Wes Anderson inspired look. This makes the overall viewing of the programme very enjoyable from an aesthetic point of view.

The first two episodes cover the first book entitled with the same name. The division of plot against the book is done well across the whole series. It’s a lot better than it was divided into the first film adaptation.

The second book in the series is again split into two episodes. Introducing Aasif Mandvi as the wonderful Uncle Monty. Things look up for the orphans when they are placed with their uncle the herboligst but things take a sour turn as Count Olaf returns in disguise and murders Uncle Monty. 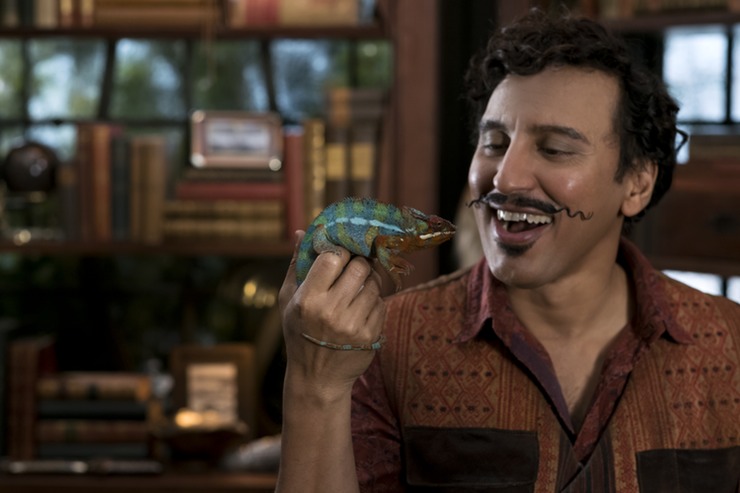 Aasif Mandvi brings such a fabulous energy to his role. It interjects some fun and excitement that is needed after a dreary start (dreary by plot nature not in terms of production.) This is the first we see of Olaf as one of his disguises so it was good to see NPH test his ability to split characters. He plays Stephano the lab assistant whilst successfully managing to remain in his Olaf character which is a tough position to play as an actor. NPH however is skilled enough to pull it off and he continues to repulse the audience as he becomes seemingly more evil with each episode.

It is in this section of the series where we get this absolute GEM that came out of absolutely nowhere. Well done Netflix, well done…

The Wide Window introduced new scenery, and a new character. Aunt Josephine was played by Alfre Woodard. Whilst she did a fantastic job at bringing her character to life, by this point in the series, I hate to say it but things started becoming a little too repetitive, and a little too simplistic. With Daniel Handler (original author of the books) fronting Netflix’s writing team for the show, it appeared that this particular series would be an absolute winner. After all, he has had over ten years to revise the plot, and a first attempt at a screen adaptation with the 2014 movie. Unfortunately, the element of mystery seems to have been lost this time around. Sure enough, there are hints and easter eggs planted here there and everywhere throughout the show, but the chronology of the systematic episodes quickly lose the initial attraction that we saw at the start of the series.

Here the show starts to pick up again. We venture through an array of different motions as a viewer in this final section of the series. Klauss being brainwashed is particularly saddening to see, as is this shot of Violet talking to a sleeping Sonny whilst picking woodchips off her baby clothes 😥

The casting of Sir is bloody excellent with Don Johnson being the perfect man for the part. Count Olaf returns once again and seems all the more dastardly. Catherine O Hara appears as Dr Orwell after originally portraying Justice Strauss in the 2004 movie. The biggest mindfuck of all was that the whole way through the series it was suggested that the Baudelaire parents were alive. After episodes of me finally coming to terms with this and adjusting to this new plot direction, hopes were CRUELY SHATTERED as it turns out Will Arnett and Cobie Smulders are in fact the parents of the infamous Quagmire children. Double mindfuck! I loved the subtle hasty introduction of these characters who become very important in the books.

The final episode of the season is a lot darker than the rest. We see limb amputations, hypnosis and fiery deaths. The appearance of The Poes at the end of the episode wasn’t a sight to be welcomed, however this set up the next season brilliantly with the introduction of Prufrock Preparatory School (yay Quagmire intro!!)

I very much look forward to season 2 as well as more amazing choices from costume and wardrobe! Let’s just have a minute to appreciate the Baudelaires style…

[all images belong to Netlflix]