After a hit and miss half of a season, the mid season finale definitely delivered. Thinking about our most recent finales, be midseason or end of, they have all concluded with frustrating cliff hangers. It was a much needed breath of fresh air to finish on what seems like a pinch of hope in a hopeless world. I think that there were some scenes which were wrongly placed in this episode, and in parts scenes were rushed which was annoying considering there have been so many slow episodes that could have done with these small pieces of action, but hey ho, we all got what we were looking forward to. Spencers’ gutting.

The start of the episode showed us just how far Maggie has come, and how she has earned the respect of most Hilltop residents who now look to her as their leader. Even Gregory has decided to start calling her by her actual name. Still though, he shrivels like a worm in her presence as excruciating as it must be to have been displaced by a woman.

Next up, we’re given three separate plot-lines which rapidly interject each other. This felt strange after such long and slow bottle episodes, however it helped to build apprehension which gave it that extra special ‘midseason finale feel.’ It’s a shame that the rest of the season hadn’t been more like this as with a theme such as a zombie apocalypse, I feel the pace should always be apprehending. We have Negan and his dinner plans with Olivia, Judith and Carl. I loved the layout of this scene, from beginning with Negan shaving, to the tableaux of them at the dinner table. The hostility was brought to life wonderfully by all three actors and it was great to see how resilient Olivia had become. We then have Daryl pondering his escape in his gloomy quarters, contrasting highly with the brightness of Ricks house. Finally, we see Rick and Aaron preparing to make there jut across the walker swamped pond of doom in order to get their supplies.

Post-credits, the episode began to flow more naturally. The buildup for Spencers death was utterly glorious. To see his sickly preparation of prepping himself to talk with Negan makes him seem like a school boy, coy and nervous. In other words, it’s somewhat pathetic. Austin Nichols did a wonderful job at playing this character. 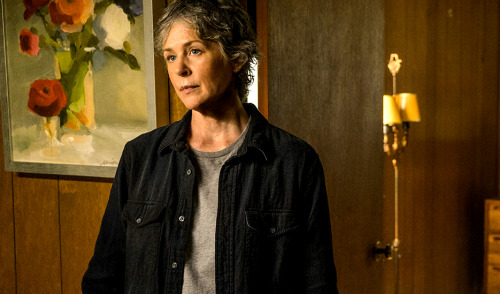 Now this is what I didn’t really enjoy about the episode – The Kingdom plot. I understand that the recruitment of Carol and Morgan had to be done in order to build the revolution feel of the episode, but it seems too far apart from where we last left them. The scene opened with a bowl of pomegranate seeds which confirms Carols new sense of self. I spoke in depth about the pomegranate symbolism here but I also think that in this instance, it could signify that Carol is ready for change. Hopefully back to her old badass self even though she’s determined not to go that way. I really didn’t understand what the reasoning behind the Kingdom soldiers milk bottles were. Could somebody please explain this, I feel as though I’ve missed something? I also don’t get why he lives in some sketchy caravan in the middle of nowhere if he is some big time Kingdom player?

After hearing the week before the episode three named characters were to die in the episode, I really did think Aaron was a goner after falling in the pond. I am glad to see he survived the episode, even though again, I thought he was going to be beaten to death by saviours. One more important thing to note about Rick and Aarons supply run was of course the booted stranger.It was a blink and you miss it moment but the idea that they were being followed by a mysterious person was quickly overshadowed by the general threat of the saviours which ultimately beats any lone ranger who is bummed because they completed his assault course. There are multiple speculations of who this may be. Some fans think it could be someone from Oceanside (the female colony that Tara encountered) or a comic character called Morales. THIS is the perfect amount of cliffhanger for a MSF and not the kinda crap we’ve had to deal with lately i.e who died in the lineup.

Onto Michonne. I enjoyed this scene because it felt like a nice mirror against when Dwight delivered his mercy kill. It feels nice when tough characters like Michonne, like the woman she had hostage, drop their facades and come across a lot more human than they would normally appear. Even though Michonne finds out how truly outnumbered Alexandria are against the might of the saviours, she also realises that not all of the saviours are wholly with Negan as the female she is with suggests. By her telling Michonne about the silencer, it is her asking Michonne to kill her because thats a preferred option than living under Negan at this point. From here, this is why Michonne goes back to Alexandria with more determination and reckoning which she delivers to Rick.

I feel as though Daryls escape was underwhelming after having such an intense time in the sanctuary. I mean don’t get me wrong, the Joey kill was absolutely brutal but I’d like to have seen him actually journey back to Alexandria because I didn’t imagine leaving would be that easy. That could have definitely happened in a prior episode. It would have also been nice to see him and Maggie reunite because of the whole Glenn sitch. It’ll be interesting to see what the showrunners are going to do with Daryl now because due to his lack of dialogue, we don’t really know what kind of place he is in mentally. If he goes on unaffected then his time at The Sanctuary was all for nothing, but how fucked up can he really be considering he wasn’t exactly straight of mind to begin with after his rocky upbringing?

The build up to Spencers death was amazing. I loved the interplay with Aaron being beaten and the stillness of the pool game that was happening with Negan and Spencer. When I imagined how his death would play out, I expected it to be done inside a house, and a lot more private, so I was surprised to see it happen in the open. I thought it was really eery to have so many characters stood watching the game in pursuit, and it made Spencer seem even more of a dick to be trashing Rick so openly in front of everyone. JDM’s acting was so exceptionally good in these scenes. Especially after Rositas shot. It was most definitely ad-libbed when his voice broke and he improvised ‘you people are making me lose my voice’ which only increased the intensity of the scene. It was the most emotive acting we’ve seen from JDM so far when he’s shot at so to see that was really something special and definitely Emmy worthy. Ricks reaction to everything that went down was equally as amazing. His capability of facial acting is so impressive. Especially when it comes to reprimanding Carl.

More action from here ensues as Olivia was sadly taken. I didn’t expect her to be the one to die but it couldn’t have really been anybody else. Bare in mind I was watching this episode on a long haul flight, my reactions were not taken kindly by fellow passengers as I watched these scenes going through turbulance. It really really really pissed me off that Rosita missed because when has she ever missed before and from SO damn close.. Obviously she couldn’t have actually killed him because plot armour, but it was definitely a foolish move on her behalf. I also had assumed that Carl would be the one to maim Lucille since they have been setting him up to shoot off centre all season. Another totally pointless (laughable even) part was Tara saying it was her who’d made the bullet. Like lol. Why. My heart breaks for poor lil Eugene although I’m hoping he doesn’t come to much harm considering how useful and precious his bullet making skill will be to Negan.

The ending was one of the biggest breaths of relief I’ve breathed in a while whilst watching this show. It makes such a change from the frustration and sadness that’s usually attached to it. Rick and Daryls reunion was glorious, as was the reunion between Rick and his python. Damn it feels good to see him with that gun again. The many shots of all the characters faces mirror how the season began with the ‘eenie meenie’ quick fire shots of everyone in the line up.

The Walking Dead will be back on your screens February 12th.

*all images courtesy of AMC*