Asides from the premiere, this was defintely my favourite episode of the season. It had nearly everything that was missing from it’s dreadful predecessors and only a couple of things pissed me off – I’d consider that a success from the way things have been going as of late!

For the first 8 minutes, Carl cringed me out BIG TIME. He outsmarted ninja Jesus (which one must never do) and he killed numerous saviours which of course will always have repercussions. When he had a clear shot of Negan, machine gun in his hand, he decided to NOT shoot which was the entire reason of him being there and delivering his whole ‘I’m only here for Negan’ schpeel – right you are Coral. 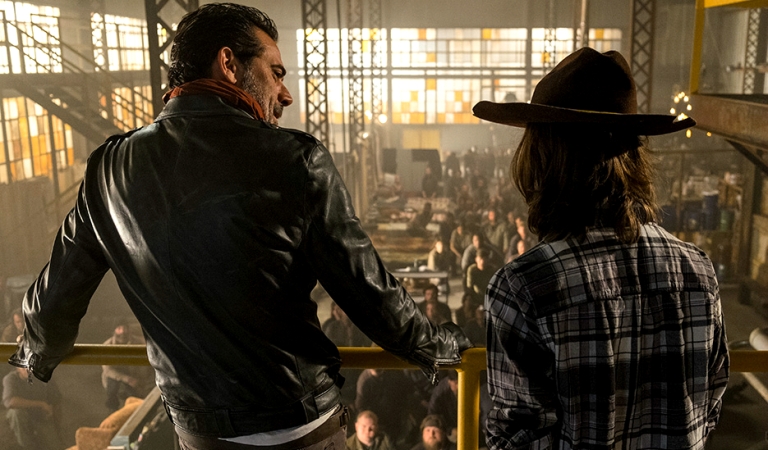 9 minutes in and we are treated to an absolutely glorious full aspect pan of The Sancturary. The first we’ve seen of it in its entirety and daaamn it was good. The precision of each tower positioning, the jagged fire stairs, the walker wall, all came together to reach it’s full effect. Bravo to the location/set team!

The scene where Negan takes Carl to his room of wives was really intriguing. It was interesting to see here his relationship with Sherry which up until now, didn’t seem as profound as it actually is. The tension between Negan and Sherry at the bar was all too much and it was easy to see how manipulative and alluring he can be. I think it’s defintely important to build on this Sherry arc so that when Dwight finally turns on the saviours (i’m hoping), he has reason and depth to his decision. It also broadens Sherrys character who is actually becoming more interesting however if I have to hear her say ‘There’s always worse/more’ one more time my head will explode.

When Negan tells Dwight to ‘fire up the furnace’ panic set in me instantly as I tried to figure out who would be victim to the iron. Thinking about it now, it was always set up to be Mark however it was definately implied that it could either have been Daryl to punish Carl, or even Carl himself. The Iron scene was as brutal as it could have been especially with the skin sticking to the iron. It just makes me wonder WHY on earth people do break the rules. Surely they all know by now how it works with Negan. Was the risk worth it to bone your ex girlfriend once? Foolery all around.

The scene that the episode title circles around completely lived up to my expectations. I think that for Chandler Riggs, the pressure from the fans of both the show AND comics would be enough to push any young actor into a poor performance, but he handled it like an absolute boss. Another gross image was of course Carls eye. I loved this entire reveal. In fact theres little that I can’t praise when it came down to JDM & Chandler Riggs together.  I was incredibly impressed. The fear he held was palpable even amongst all his adolescent bravado. I loved the side profile shot which mirrored the comic issue and it gave way to the anguish and fear he allowed Negan to see when he was singing for him. An excellent performance all round for Chandler – he held his own throughout these 1 on 1 scenes with JDM which would be a challenge of it’s own. Another highly moving moment during this interaction was Negans apology to Carl. It was haunting because it felt so real. This is probably one of the first times we have seen this side to Negan which is forefronted frequently in the comics. I geniunley believed every word he said through his apology and I’m glad to see his softer side come through which really deepens the dimension of his character. For a few weeks, the way that JDM plays Negan has almost crossed ‘Pantomine Villain’ terrortiary but this weeks episode helped break his character down a bit more. More on that later.

Now for the MAJOR flaw of the episode. So we see Jesus clinging on top of the truck that holds Negan and Carl as it leaves the sanctuary, We saw it, Daryl saw it, but apparently the saviours posted on guard on the higher levels completely missed that one. U SRSLY doing this again Gimple? These minor errors are the little things that get comic readers riled. It was nothing compared to the atrocity we saw last week however it still seemed like a pointless error to make. This gives way to the big ‘Who gave Daryl the key’ question. Some people think it was Jesus, others Sherry. The main theorised potential is of course, Dwight. I definately saw a few glimpses between Dwight and Daryl that looked more than just disdained sneers. Having had so much screentime that didnt include either of them in the past few weeks, it leaves us uncertain to how their relationship has grown. These subtle hints/nods that were exchanged between the two last night seem to point towards a co-erce. It would also make a lot more sense as to why there was so much focus on Negan & Sherrys relationship because it fuels the context for Dwights rebellion.

Another great piece of Negan was his interaction with Olivia. I love love looooved the part when he mocks her crying and looks at Carl with that grand ole bemusement on his face. My favourite section of the episode followed this, in which Negan gets the grand tour of Maison de Grimes. I’m loving this seasons use of music, it brought the segment to life!

Negan wriggling his toes on carpet, priceless. Negan using a tap, with a stone faced Carl in the background, priceless. Negan opening the door to Judith…absolutely terrifying. By far the most concerning part of the episode. With this storyline, it could go in any direction given that Judith isnt around anymore in the comics. The two of them sitting on the porch with Judith was still as worrying, made light with Negans hilarious comment to a passerby. It’s so difficult to hate him when he’s making grill up jokes in a rocking chair dammit. It’ll be really interesting to see where Judith will now take this storyline.

As well as all this relationship build between Negan and Carl we also see several sub-plots unfold. Rosita is finally having her damn bullet made whilst giving Spencer a piece of her mind. Spencer is gonna get what he deserves very VERY soon & we saw lots of foreshadowing for this during the episode (HINT: Check out the walker he took down in detail.) Aw, but isn’t he sweet finding all the supplies for Negan. I’m sure Negan will be extremely pleased with how gutsy he is becoming on his scavenges. Papa G giving his opinion on things was THE BEST. I love how creepy and confident he has become. He is the best piece of character development since early days Carol. I thought for a moment that Spencer was going to try and kill him and I was surprised at how worried I was! I don’t actually know where he is because it seemed as though Spencer had made it back before him but I’m sure we will see him around next week. What’s a mid-seez finale without a holier than thou kill. (Never forget his gangster first kill)

Meanwhile Michonne is back being the badass savage bitch she is, not taking shit from any red-head saviours (why are all the female saviour fighters red head) Finally we have Rick and Aaron, out and about, wasting time. I’m guessing the reason why the supplies they have found are so inaccessible is to add some thrilling walker action scenes to the show since they have been lacking slightly (I’m not complaining) and so that Rick will be away from Alexandria for a bit longer, giving time for Negan to fuck shit up before he leaves again.

I can’t believe we’re almost 8 episodes deep and are yet to see Rick meet Ezekiel & Shiva. I guess that CGI budget is really sparse huh?  Anyway, if we can take anything from the teaser trailer for next weeks episode. It’s a clean shaven Negan. Noooo….

*all images courtesy of AMC*