The season premiere of The Walking Dead attracted herds of complaints from parental groups and schools alike and the ‘unnecessary violence’ was branded abominable throughout multimedia channels. As if to compensate, this week was probably one of the mspt passive episodes to date. Was it needed? Yes. Did I enjoy it? No.

One of my ultimate TV show pet hates is when an episode focuses on one story line in one location. Other examples of this kind of episode are TWD S06E04 ‘He’s Not Here’ (RIP Tabitha) or Breaking Bad S03E10 ‘Fly.’ Whilst these episodes are often vital to the story in terms of exploring character depths or reaching pivotal relationships, I really dislike the interuption in the narrative flow. I would have took this episode if it had appeared third in the season but the contrast between the premiere and this one was too much. It was hard enough to rebuild momentum between the series finale of S06 and the premiere of S07, but to have another pace drop after a high action first episode is really annoying.

Enough of the bad, and onto the good. The introduction of King Ezekiel. Oh King Ez and your paper crown. Initially, I was upset to see that the character I’d been looking forward to was a bit of a dick. He spoke in prose, he plastered the walls with excerpts of his speech and WHAT HES POISONING HIS OWN PEOPLE? Alas, this faux-persona was dropped and like a hurling rollercoaster, my feelings towards him U-turned and there was nothing but love. I love that they decided to play his introduction like this, you start off by assuming the worst as your led to believe that he’s feeding his kingdoms produce with walkers, only to find out he’s actually feeding the saviours with them.  Most character introdutions in The Walking Dead are shrouded with mystery. We know little to nothing about most peoples ‘former lives’ but in his first episode, we find out a lot about King Ez’s beginings in the new world. 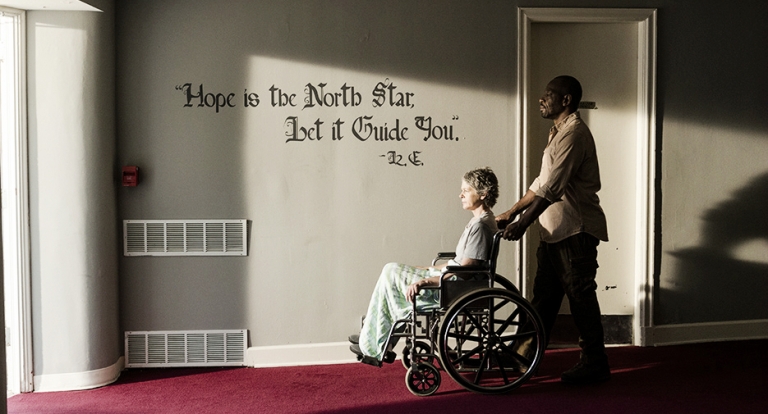 Why in this world (or any) Carol would OPTIONALLY CHOOSE to live in an unsecure Calamity Jane house on her own is beyond me. The whole ‘Carols run away again’ subplot was getting sooo boring so at least she’ll actually be in one place for now. I’m hoping that when she hears what went down last week, something inside her will reignite and everyones favourite badass mom will make a return. It’s highly speculated that she will take Michonnes storyarc over in regards to a love affair with King Ez so that could be an interesting development. Actor Khary Payton who plays Ezekiel said on Talking Dead that its a sure sign when a man changes his shirt in TWD that he’s trying to get laid and from history, we know that’s true.

The whole pomegranate drama  draws reference to the story of Hades and Persephone from Greek Mythology. Hades traps Persephone in the underworld by making her eat a pomegranate. Reddit user Nightsey explains this concept gloriously and goes on to discuss how Persephone was one of the only people who could travel between the world of the living and of the dead, potentially why Carol appeared to see walkers in their human forms briefly at the begining of the episode.

This episode also introduced us to numerous characters who are sure to entertain us over the coming weeks. Shiva was an impressive work of art. Using a combination of animatronics and CGI, the finishing effect was flawless. Can we make sure Shiva is protected until the rest of time please writers? I dont like comparing TWD to Game Of Thrones but if we have to endure another direwolf-esque death I dont think I’ll be able to carry on. Another wonderful new addition to the cast – Jerry. Jerry has seamlessly fallen into the comedic characters category which was definately needed after the loss of Abraham (RIP)

Finally, the introduction of Ben defintatly raises cause for discussion. What I think will go down with him is most probably a tragic death, but not before we find out that his ‘dead dad’ is actually not dead at all and instead, live and kicking back in Negans compound. It isnt totally out of the ordinary for a strong fighter to die in the world of the walking dead, but the fact that it was brought up suggests a future plot development. It wouldnt surprise me if his dad ends up being inprisoned with Daryl next episode. Watch this space.

Let’s hope that next week, we’re took back to Alexandria because some very emotional reactions are due to take their course. TARA DOESN’T EVEN KNOW ABOUT DENISE YET! How will Rick and co even begin to explain what has happened. I want the episode to start from them leaving in the RV because I dont want one moment of emotion lost.

*all images belong to AMC*

One thought on “The Walking Dead S07E02”