The All or Nothing musical contained everything you could possibly want from a sixties musical period piece. Read Steady Go? Check. Monochrome shift dresses? Check. Lambrettas? Check. Psychadelia? Check. These elements, along with the electric cast, blended together with a familiar story arc of the rise and fall of a band came together as a fantastic production.

The story arc was a classic; band forms, parental clash, exploitive manager, musical direction fall out, girls, drugs, manager fall out, split. All these ingredients were present at the Manchester Opera House as the ATG Theatre group presented the musical story of influential R’n’B band The Small Faces. In a week when their contemporaries The Who, The Rolling Stone and Paul McCartney were performing in the Californian desert to some 150,000 people Rod Stewart was ennobled and Bob Dylan was en-nobeld, it was a pertinent reminder that some of the brightest sixties stars burned out before the decade was over.

The story was told in a series of sketches, dramatizing some of the notorious elements of The Small Faces. We saw Don Arden suspending Robert Stigwood out of his office window. We saw Andrew Loog Oldham disappearing into a cloud of weed, taking all the royalties with him. We saw an infamous Top of the Pops appearance, the gestation of Lazy Sunday, and even the time they were booed off from a Sheffield working man’s club (HILARIOUSLY depicting the North/South divide in a crude but entertaining way which played brilliantly to a Manchester audience.)

The show was skilfully knitted together by Steve Marriot the elder, looking back from beyond the grave to narrate the piece. Portrayed powerfully by Christopher Simmons who began the performance with chirpy, cockney self-assurance, but gradually declined in tune with his younger self to finally occupy the stage alone, as a broken man. 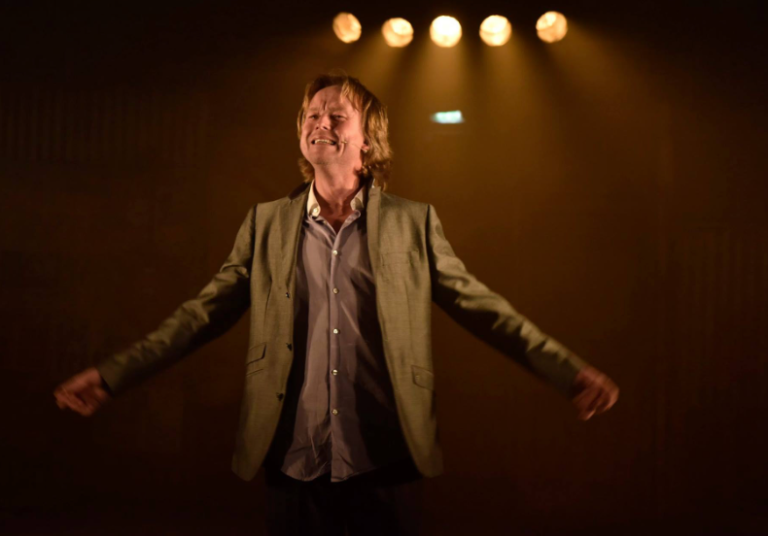 The story was also punctuated by the other stars of the show, the songs themselves, played with the authentic energy by brilliantly cast actors who were equally completely invested in the music. We were also treated to beautiful renderings of Dusty Springfield and PP Arnold with ‘You Don’t Have To Say You Love Me’ and ‘Angel of the Morning’ played by mega-babes Sophia Behn and Dami Olukoya.

The story of The Small Faces as a collective lasted 4 years but the careers of the individuals, both the triumph and tragedy, stretched onwards and were subtly foreshadowed. The Who, Peter Frampton and Sir Rod himself all made appearances in the show (not in person obv) tantalising a ‘what happened next’ teaser, but far more poignant were the hints of the house fire that killed Steve Marriot and Ronnie Lane struggling to get up after a fan knocks him over, reminding us that later he succumbed to MS. If anything the show was first and foremost a celebration of the band. The finale was a beautiful moment in which the cast conducted a sing-a-long and the production turned into an almost concert. Every man and woman was up on their feet dancing and singing along, whether they knew the words or not. This show can be appreciated by loyal fans of the sixties band or absolute novices. The show was highly lifting despite the bands struggles and this was down to the fabulous writing by Carol Harrison and a highly talented cast. All Or Nothing is on at the Opera house until 22nd October so get on down if you are a fan of music of any kind! You won’t be disappointed!