Last nights episode of Game Of Thrones changed the game forever. It was the most tantalising episode to date in terms of plot development, and left viewers distressed, confused and at a total loss for words. We’ve had some sad moments in Game Of Thrones over the years but nothing could prepare us for the heartache that ensued in the mid season episode. Here’s what I thought about ‘The Door’:

The episode begins with a secret meeting between Sansa and Peter Baelish. He arrives to offer his armies to the Stark cause yet she annoyingly shuts him down. Why does Sansa think she is queen of war? How many battles has she planned in her life? Why does she think she can pull a blind one on Jon? It’s not okay. However the most interesting development in this scene was her line:

Well in my opinion last night she basically confirmed previously ignited rumours in that she is well and truly preggo with Ramsay Boltons child. It’s very inconvenient for everyone involved. Except Ramsay. Who now has a future heir of Winterfell.

Considering Arya has now been in Braavos for 14 episodes. Yes 14!! We still don’t know a lot about her current situation. Jaqen H’Ghar used to be this really elusive and cool character and now his mysterious ways are booooorrrrrrriiiinnnngggggg the hell out of me. Just be on with it will you and get Arya on her ship to The North. Or at least reunite her with Nymeria. It was surprising how much screentime the writers gave to the play which Arya went to see. We were shown a short and brash version of the events that we’ve seen occur in the past but when time on the show is precious, I’d rather be watching new material. That being said I loved the writing of the play and seeing Arya in a crowd was an unnerving mirroring to that fateful season 1 episode 9 moment where we last saw her in a crowd.

We are then transported to a memory that the Three Eyed Raven has chosen to show Bran. In literally three seconds thousands of fans across the globe emitted groans of NOOO as George R.R Martin and D&D decided to sum up the origin of the white walkers. A topic which could have been dark and intricate, summed up in seconds. Now the annoying part is, this could have been a real zesty eerie scene with a large amount of context and visual glory. However, the good thing about this is that the plot just developed more than it has done in the past two seasons. Even though the scene was sparse I have no doubt I’ll be given contextual excellence when the new book is released so I don’t mind so much. The dagger used to kill the man appeared to be Obsidian metal which is a nice touch in that they can only be killed by what created them. I also LOVE that the origin plot is SO RELEVANT TODAY. It’s flipped the entire perspective. They aren’t the baddies, we are! Humans! For chopping down trees and ruining the world. Did Leo produce this episode? Am I meant to feel this guilty? Did the weirwood tree have the three eyed ravens face? So many questions, so long to wait for answers. 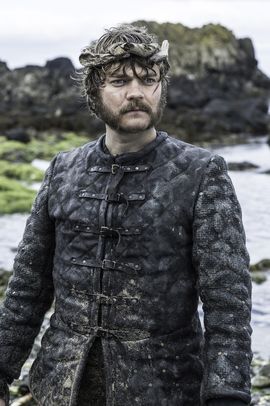 Next stop, Pyke. The kingsmoot is upon the Greyjoys and Theon is rightly backing his sister. He makes a cute speech on why she should rule the Iron Islands and lead them into battle against the rest of Westeros. I probably would have enjoyed seeing Yara being queen and battling it out against the other strong women in the show, but that was quickly shot down by the arrival of Euron Greyjoy who claimed the rulership for his own. His hopes to wed Daenerys are another huge plot mover as the world of Westeros widens even further with a potential Greyjoy/Daenerys clash. I look forward to hopefully watching his mysognistic self crumble into ash. Cinemtography wise, I loved the sequence of Eurons Kingly baptism/ritual as Theon and Yara escaped. The soundboard and punchy takes were exciting which was relieving considering Pyke can easily bore.

Oh god. I wasn’t ready for this Daenerys and Ser Jorah moment. I’ve gotten so use to her rejecting him that I forgot how nice their bond was. I mean, they’d be a very strange couple and I don’t think it’ll ever happen but I am happy to have seen her express her true feelings. I also like the way it was written so that he’s not curing himself for his good but for hers.

It was especially interesting to see a new Red Witch appear on our screens. The Lady of the Light who attended Varys and Tyrion basically had totally opposing ideas to Melisandre which really shuns the authenticity of the lord of the light (or maybe just Melisandre.) I’m so glad that Varys’ not so humble beginnings were explored because that’s such a good part of the book. Melisandre thinks that Jon is The Prince Who Was Promised, the new witch thinks Daenerys is. Is this a nod towards a Daenerys & Jon family relation? 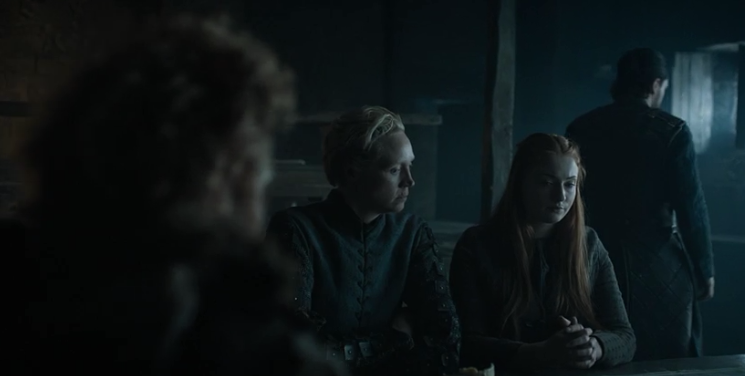 I HAVE NEVER LOVED A TV COUPLE MORE THIS IS THE ULTIMATE SHIP GUYS. It’s just like, how did we never see it before? It’s perfect. And one of them will probably end up dead just to ruin our lives even more. Look at those first two shots. Only a couple of seconds long but seeing Brienne in Tormunds point of view when neither of them are even holding the conversations is just one of the many ways the showrunners are luring us into this pairing. Not everybody loves it though. Many fans are hitting the internet with frustration as they believe Brienne is destined to be with Jaime. Jaime has too many daddy issues though. It NEEDS to be Tormund. 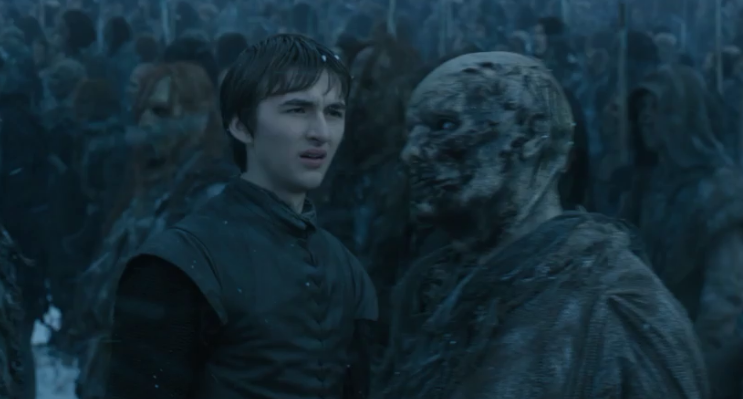 Oh Bran you petulant child. Why must you be such a fool. It’s one thing to warg yourself into the middle of an army of the dead, but its another to walk right through it.SOMEHOW the godlike all seeing, all knowing three eyed raven can’t wake up from a heavy slumber (???) so Bran goes on a warging adventure on his own. This was an incredible scene with notable shots like the initial wide camera pan of the entire army and also how the army had all turned to face Bran when he approached the White Walkers. Amazing work.

Shortly after Bran has been told “it is time for you to become me” Meera and Hodor share a sweet moment as a subtle and painful unbeknown goodbye. As I said in my last blog, Meera is a character who is developing into an all round bad ass and we’re certainly going to see her in all her glory as she tends to Bran all alone in the wild. I’m gonna come out and say it that I am a strong believe in the theory that she is Jon Snows twin sister. I won’t bore you with the historical details but it’s certainly plausible and would explain why she’s such a bad bitch lately. Also, did you know she’s only the third character to kill a WW?

My one complaint in this scene is that I think the Children Of The Forest died too easily. Sure, they had jazzy little snow fire grenades, but they have been introduced too late in the show to have been killed so easily and early on.

I would also like to take a moment to directly ask HBO and George R.R Martin to STOP KILLING DIREWOLVES. It’s unnecessary heartache and I can’t take it anymore. RIP Summer.

Now here’s where it gets confusing. If you’re a little stuck on the physics of it all, then I’ll try and sum it up in the easiest way possible.

Get it? All in all as far as i’m concerned, Bran didn’t change the past, he just caused it. It can hurt your head if you think about it for too long but lets not let the concepts of time travel ruin what was one of the most somber ever GOT deaths. As soon as Meera had said hold the door for maybe the second time my heart DROPPED. One of the best ever Game Of Thrones episodes and I can’t wait a second longer for the next episode. 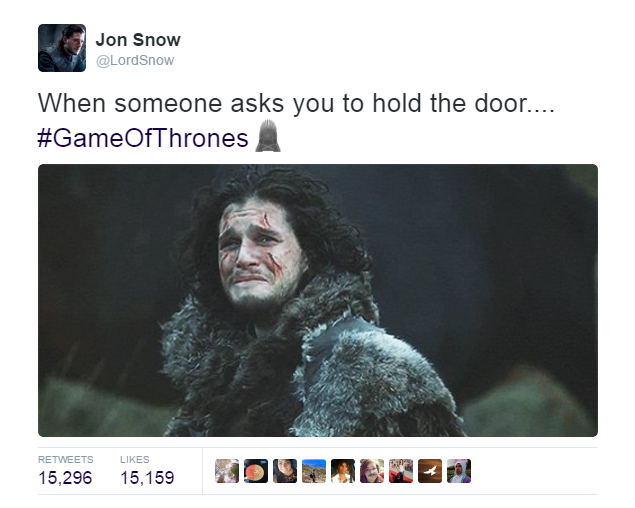 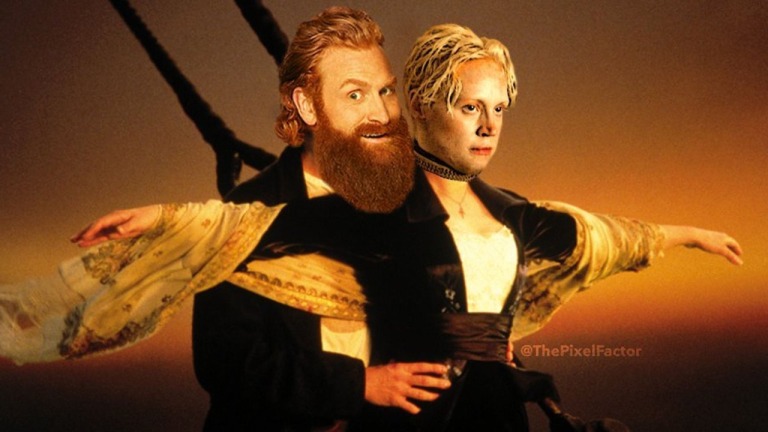 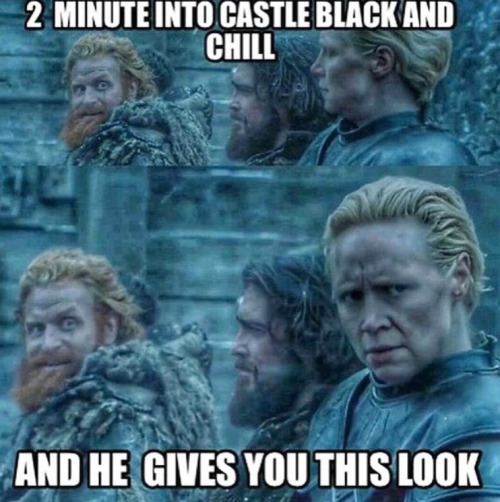 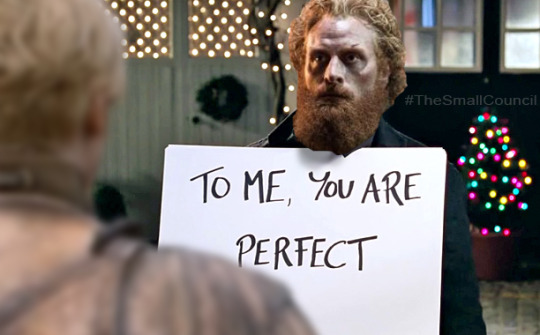 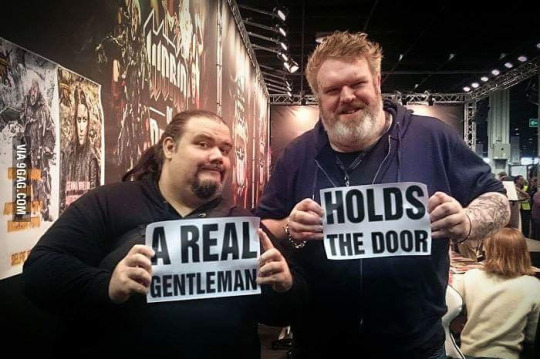