With an episode title name “Book Of The Stranger” it was presumed that we’d see a lot of death in this episode (The Stranger is one of the seven Gods, and he is the God of the dead or dying.) With this assumption in mind, I didn’t expect Sansa, Podrick and Brienne to arrive at the start of the episode. THANK YOU WRITERS for moving this along so quickly. With the complexity of story-lines and history context, this is the rate that the whole season should be moving at.

My heavy, hungover heart couldn’t handle the Jon and Sansa reunion. These two characters had the most complicated relationship of all the Stark siblings and it was touching to see all the bad blood left behind them. They could both make light of their former grumpy teen selves. As a side note, it was also good to see them reunite as actors. Over the past few years, the Stark cast have expressed how they long for a reunion as much as us, as they haven’t worked together for so long now. It was nice that Sansa and Jon felt so familiar on screen together and that is down to the genuine chemistry between Kit Harrington and Sophie Turner as actors, and old friends. Despite this being their first ever scene together, it felt comforting and nostalgic.

Melisandre is fickle as f*ck. Yeah obviously I’m forever in her debt for resurrecting Jon, but can a bitch quit mulling around and referring to Jon as Azor Ahai as if she knew it all along and didn’t need to burn a child at the stake for no reason? It was easy to forget about the problems in the past between Melisandre, Davos and Brienne and the ghost of Renly seems an age ago now, but Brienne, as loyal as ever, delivers her gumption speech whilst hopefully closing the Renly case for good. The best thing to come out of this scene was confirmation that Stannis was dead. I mean it was already presumed because of his absence this season but it did seem strange that they never showed the execution. Perhaps it was a post-production decision, either way, his death is confirmed.

Robin Arryn is as sickly as ever and his cavalier suggestion to “shall we throw him through the moon-door?” shows us that he hasn’t matured or aged a single bit. Petyr Baelish remains to be his cunning and smart self. I like Baelish which I get is an unpopular opinion but he is a character who makes decisions based on the future and without haste – a vital flaw many of the GOT characters hold is to act with haste. Suddenly, Jons fears of no army are diminished as Robyn (Petyr) decides to help out his cousin to reclaim Winterfell once and for all.

Tyrion has fully took control of Daenerys’ “reign” and he makes tactical decisions as a solid ruler of war would. The problem is, Tyrion is a genius when it comes to ruling over Westerosi land in matters of war and blood, but bring him to Essos and his wisdom seems somewhat of a loss at first.  Tyrions greatest asset is his art of conversation and the culture barrier is ever prominent between Tyrion and the Essos folk. He does eventually wager a deal in which the masters will stop interaction with the Sons of The Harpy, in exchange for a 7 year fade out of Slavers Bay – I don’t believe for a second this will help the Sons Of Harpy situation. It’s amazing to see how powerful Tyrion could be as a ruler. Him and Daenerys are very similar in the sense that they are both trying to bring these two very different cultures together. I am eager as hell for some more Tyrion & Daenerys screentime! The fact that Missendei quotes him as a wise man after a day of tireless conflict, is a huge moment. It almost right there and then defies Tyrion as a legend, which of course we all know he is.

Ser Jorah and Daario go back and forth as usual in there own war for Danys love. I’m not madly into this side plot because yano, everyone will die from White Walkers eventually so theres no time to squabble about whats fair in love and war. The only moment I did appreciate was that Daario discovers Jorahs greyscale. It was a sad sobering  moment as he was asked whether he knows what will happen to him (eventual spreading of the scale which will one day harden him head to toe and then his insides will also turn to stone leading to an agonising, long and lonely death.)

Finally we have our first real Margery scene for a long time and YAWN it’s mostly filled with another boring lecture from the high sparrow about piety and service to The Seven. What is interesting however, is the contrast between Margery and Cerseis imprisonment mentality. Margery appears to have kept most of her strength, sanity, and even wit in tact showing the true determination she has for the throne. Cersei however, seemed a lot more vunerable during her time in the dungeons, but perhaps as a mother, she just had more at stake. Loras doesn’t seem to be doing too well and has to be tearfully reminded by Margery to continue to fight. He’s had a huge transformation since his role by Renlys side as the glorious warrior he used to be. I think the fact that the Lannisters and Tyrells are going to come together to overthrow the High Sparrow is the best idea they’ve had in a long time.

From one reassuring determined sister to another (notice a theme tonight from Sansa to Jon, Margery to Loras and now Asha to Theon.) Asha Greyjoy is reunited with her brother Theon which begins unemotional but we see Theon begin to break down. It doesn’t seem like a weak kind of cry as much as it seems like a relief. He’s home and safe (for now) and that must be wholly overwhelming after what he has been through. It would be annoying if he was too ambitious and wanted to be raised to King of the Iron Islands in the upcoming Kingsmoot, but instead, he humbly says he will fight for his sisters right to the throne. Cute.

I’m so SO annoyed at the fate that Osha had delivered to her. I literally wrote in my notes “Could Osha be the Ramsey Slayer???” then seconds later I was watching her bleed out on the floor. Such a classic Game Of Thrones brutality to remind us how cheap life is on the show and how quickly moves can be made. I know she’s been AWOL for a few years but it was very unjust to be killed off upon her return. I had such high hopes for her character. Tis a sad day. RIP Osha. RIP.

When Jon is reading his letter from the Boltons its almost amusing how bored he sounds at their threats and insults. He sounds like he’s reading mean instagram comments. Cut to rape threats against his sister and things get serious. So it’s decided, they will march upon Winterfell against Boltons 5000 with their 2000 Wildings, stragglers from the wall and the unknown army of the Eyrie. Is this not the most random dinner party of all? AND CAN WE HAVE A MOMENT OF PURE RESOUNDING JOY FOR THE BEST PART OF THE EPISODE I REPEAT THE BEST PART OF THE EPISODE THIS IS NOT A DRILL…………..

As much as I love Daenerys I hate how repetitive her scenes can be.  How many times will she be stood in the centre of a circle and be spoke to in High Valyrian with insults and threats of rape thrown into the mix? Despite this repetition, I really loved to see her interact with another Khaleesi, I hope she becomes a regular character just to have Daenerys have another girl to interact with (that’s not Missandei) It’s always a treat to see that good old dragon blood come to good use and Daenerys once again exemplifies why she refers to herself as the unburnt. It was a great justice to burn the mysoginistic khals that so nicely called her a crazy cunt and threatened her with horse rape but where can this take her now? Do the other Khals and Khaleesi’s now intend to cross the sea that they hate so much? Everyone bent the knee but when has Daenerys been able to control the Dothraki successfully before? 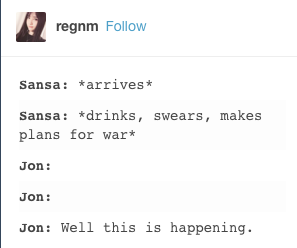